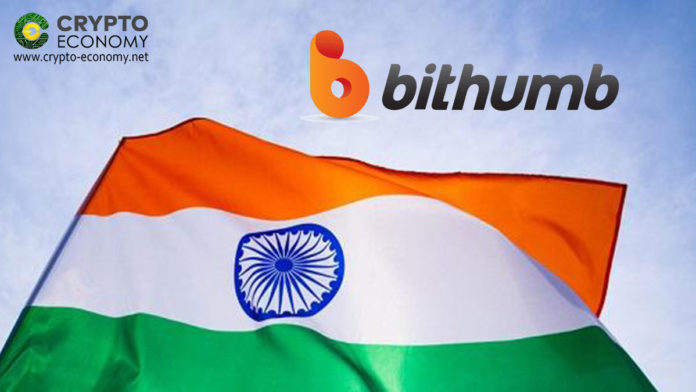 Despite the hostile operating environment in India, South Korea’s biggest cryptocurrency exchange Bithumb is looking to engage the Indian government on establishing itself in the leading Asian economy.

A report published by Indian local news media Economic Times (ET) on Thursday quoted Bithumb Global co-founder and managing director Javier Sim as saying that his exchange is looking to expand to India by partnering with Indian local cryptocurrency exchanges, funding blockchain startups in the country as well as introducing some new blockchain initiatives in the country to support the growing local blockchain industry.

“We are open to talking to regulators, working with them to be a regulated exchange,” Sim told ET. “We are a strong brand from Korea and do not involve ourselves in unregulated or illegal trade.”

As mentioned above, India is not particularly keen on supporting the use of public chain assets such as Bitcoin. Last year the country’s central bank the Reserve Bank of India gave banks an advisory to restrict any businesses that were involved with cryptocurrencies. This meant that exchanges and other blockchain related businesses were cut out of the banking sector. The RBI did not explicitly ban the use of cryptocurrencies but it did make it harder for people to access cryptocurrencies by barging exchanges that offered fiat to crypto onramps. The affected businesses in the country have taken the RBI to court and the case is being heard in the Supreme Court.

In addition to the RBI ban, there have been reports that lawmakers and government agencies are considering implementing a complete ban to use of cryptocurrencies other than those issued by the RBI or the government. So basically, the regulatory environment in India especially for virtual asset business is currently uncertain which has discouraged the growth of the industry. It seems like Bithumb is be jumping into regulatory limbo with its quest to launch in India. For it to be allowed to operate in the country would mean that all previously operating businesses will have to be considered.

Koinex, a former virtual asset business that closed shop earlier this year noted the following as part of its reasons for exiting the market:

“Multiple delays by the government agencies in clarifying the regulatory framework for cryptocurrencies despite our pending writ petition in the Supreme Court of India, coupled with regular disruption in our operations, the final decision has been taken after duly considering all the latest developments in the crypto and blockchain industry in India.”

This is only the tip of the iceberg, the cryptocurrency industry in India is completely unsupported by the government.

0
A new NFT customizable card has been launched by hi along with Mastercard for the first time in the world. It is now possible...
Read more
- Advertisment -
Posting....
We use cookies to ensure that we give you the best experience on our website. If you continue to use this site we will assume that you are happy with it.OkPrivacy policy