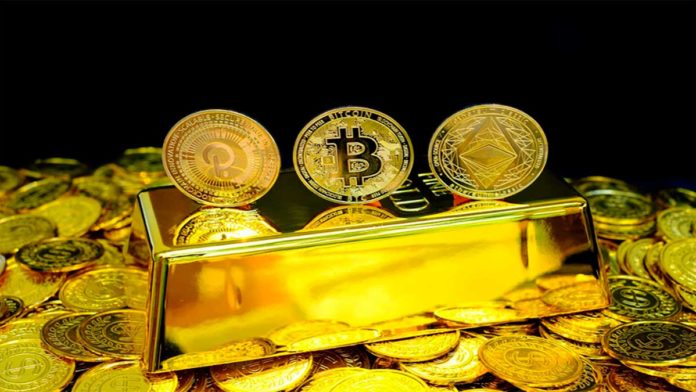 Bitcoin has often been dubbed the digital gold. That is because, even though virtual, it has characteristics of gold. In particular, both are deflationary. In some other ways, however, it is so different from gold that treating them as the same is a stretch.

The difference between gold and Bitcoin is not only in form but also in functionality. Today, you can easily shop online and pay the client directly in crypto, their location notwithstanding. You can hardly do the same with gold.

You have even more options when using crypto debits cards like Clubswan, Coinbase, and BitPay. You can pay in crypto, and merchants will receive the currency they prefer.

With that stated, Bitcoin is reawakening the spirit of the gold standard. That is especially in regard to controlling inflation, which has over the years eaten into the purchasing power of money.

What is the gold standard?

The gold standard was a monetary system that was the hybrid of precious metal money and paper money. The paper money simply served as a placeholder for gold.  You could walk into a bank and exchange it for an equivalent amount of gold.

This monetary system existed throughout much of the developed world between 1870 and 1970. Many have regarded it as the best monetary system to ever be created despite its short life.

The gold standard was created to solve a pressing problem.

Gold in the vaults is a secure and reliable store of value. However, it is a poor medium of exchange, especially because it requires costly and physically engaging logistics to store and move.

Paper money, on the other hand, is more convenient to carry around. It is better than gold at being a medium of exchange. However, it is a poor store of value as its supply can easily be increased without limit. All it takes is to just print.

The gold standard was a genius innovation that took the best qualities from both gold and paper money. As each paper currency in circulation had to be backed by gold, the supply was limited, preventing inflation.

A fixed exchange rate between paper money and gold was set through legislation. For example, an ounce of gold was exchanged at $20 in the US through the 19th century.

Before the gold standard

The concept of printed paper representing gold in transactions did not start with the gold standard. Indeed, paper money could be considered a by-product of using gold as a currency.

While gold has served as money for thousands of years, the challenges of securing and transporting it have always persisted. However, people have always tried to find a way around these challenges.

In medieval Europe, and even in ancient Mesopotamia, people with gold often leased space in goldsmiths’ vaults to secure it. When they delivered the gold, the goldsmith issued them receipts as proof of what was in the vault. They presented the receipt to the goldsmith whenever they needed their gold back.

In some cases, some would deposit gold with a goldsmith in their city and redeem it from another goldsmith in another city. This made it unnecessary to carry gold when traveling.

While members of the public had their gold secured, the goldsmiths had an extra source of income.

With time those who had their gold in vaults realized that instead of retrieving the gold to settle debts, they could pass the receipt to settle a debt. The new holder of the receipt could choose to present it to the goldsmith and retrieve the gold or pass it on to others.

Soon passing the receipt was accepted as a more convenient way to settle debts. The paper or clay tablet receipt turned into a currency deriving its value from the gold stored in the vaults. Most people started seeing the receipt as money and didn’t bother to present to claim the actual bullion.

This arrangement must have been, at least initially ad hoc and informal. It was later on formalized and regulated by the government to become the gold standard.

The gold standard is the law establishing how much a unit of gold is worth in paper money.

The first country to establish the gold standard was England in 1821. It was followed by Germany, Italy, Belgium, Switzerland, and France in the 1870s. While the US  had some form of gold standard before the civil war in 1860, it implemented a complete switch over only in 1900.

Meanwhile, China, Hong Kong, British India, and the Philippines had opted to have a silver standard instead.  The UK had had some form of the silver standard earlier than them, though. The Sterling Pound was originally one pound weight of silver. This measure of currency started being used on the British Isles around  775AD.

The classical gold standard began in the 1820s and ended with the second world war in 1945. It is characterized by individual sovereign states determining the convertibility between their paper currencies and gold.

The enactment of this law made it illegal for private citizens to own gold worth more than $100 illegal. Gold was confiscated and sent to the government vaults. Other countries took similar steps.

As the second world came to an end in 1944, the allies met in Bretton Woods, New Hampshire, to discuss the way forward for the global community, especially regarding reconstruction and preventing another world war.

It was at this meeting that a new gold standard was born. While this was global, the US dollar would be the only currency convertible with gold. With this feature, it became the global reserve currency. Nations could use it to settle debts.

At any point, a country or foreign entity with US dollars could exchange them with gold at the US treasury at the rate of $35 an ounce. However, individual citizens, including Americans, could not redeem the gold.

In only two decades, the system began to fail. Several nations, including France, began to actively redeem gold,  depleting the US reserves. To prevent this from continuing, president Richard Nixon signed an executive order in 1971,   officially ending the Bretton Wood gold standard.

Lessons from the gold standard era

Today, there are those pushing for the re-establishment of the gold standard. They believe it is what is needed to control inflation. That the standard would also add certainty in international trade as exchange rates become relatively stable.

That it would also provide a self-correcting mechanism in international trade deficits. Using a currency backed with gold would make a country with a high trade deficit experience an outflow of gold.

In return, this leads to a decline in domestic prices, increasing competitiveness and, ultimately, the deficit correction.

Why did the gold standard fail?

Today, no country is on the gold standard. The reasons it failed are varied, but two stand out.

First, it was easy for central banks to pause it. Whenever they needed to, such as to raise funds for war efforts, it did not take much effort. If it had been technically difficult to pause the system, it could have stayed long enough to prove itself.

Second, and more importantly, not everyone was persuaded the gold standard was the right monetary system to have. Those who have always opposed it are not necessarily malevolent.

Their reasons include its rigidity that becomes an inhibition to economic growth. In particular, it makes it difficult for the central bank to respond to the expanding and shrinking of the economy.

In a fiat money system, the central bank expands or shrinks the economy by managing the amount of currency in circulation. That happens through printing more bills or increasing interest rates.

For some people, it is unacceptable that a financial system makes it difficult for a government to fund the military using inflation. The gold standard was paused during wars because the central banks would bar citizens from redeeming gold so that it was used to pay for war supplies.

If not paused, the gold could be unavailable to the government as citizens quickly moved it into private vaults.

Of course, in periods of uncertainty, such as during wars, most people prefer holding gold to paper currency. Gold can withstand political instability, outlive regimes, and even states.

If gold was easy to use as a medium of exchange, there wouldn’t be any need to invent a system with printed paper to represent it in transactions. Likewise, if paper money could be secured enough that the problem of inflation does not arise, then it wouldn’t be necessary to back it with gold.

How crypto reawakens the spirit of the gold standard

It is highly unlikely that the old gold standard will make a return. However, blockchain has provided the means to achieve its goals. The technology has made it possible to have a currency that is both deflationary and easy to use, like fiat currency. In fact, in many ways, crypto is better than both gold and fiat currencies.

Bitcoin, in particular, does more than mimic gold. While gold has marginal inflation, as about 3000 tonnes are added into circulation every year, Bitcoin is deflationary as its supply is capped at 21 million coins. Indeed, some bitcoins will be lost from circulation, with users forgetting keys to wallets.

However, that does not mean there wouldn’t be enough units in circulation to support global commerce. That is because each bitcoin is divisible up to eight decimal points. That translates to 100 million smaller units (satoshis) in each bitcoin.

Unlike gold that requires relatively costly and physically involving logistics to move and spend, cryptocurrencies can be held and spent using smart handheld devices. They can also be spent online and across the globe without going through third parties, something impossible with precious metals.

Meanwhile, its transactions are near-instant.

While the government can relatively easily confiscate gold and dilute fiat currency through inflation, cryptocurrency completely outsides the government’s control as it is difficult for it to know who owns what amounts and where they are stored. They are not kept in easy to detect physical vaults.

If countries decided to use Bitcoin to settle import and export transactions, they don’t need to trust one another like they had to trust the US government in 1944, which unilaterally took itself out of the Bretton Wood gold standard three decades later, leaving others with dollars they could not convert to gold as earlier promised.

The currency is based on mathematical protocols and smart contracts, which execute without the possibility of tampering by any counterparty.

Indeed, it is also not a monetary system to be paused for convenience. The government has to plan its finances around the system rather than the system around its financial needs. That is because the financial rules are immutable.

Indeed, there is no reason now to bring back the gold standard. Cryptocurrencies can offer better value to consumers around the world.