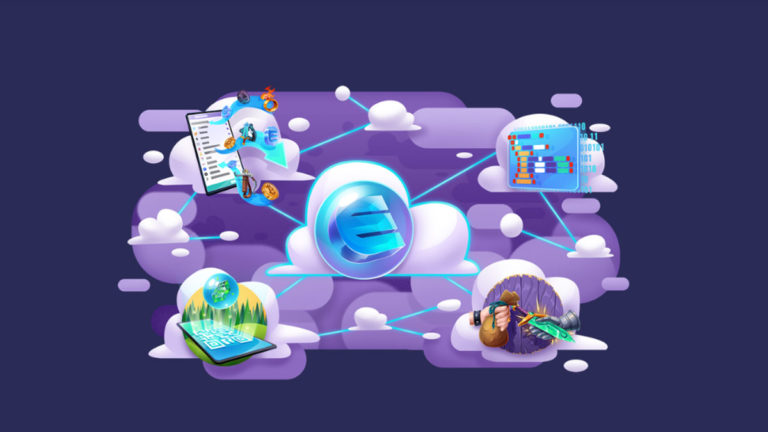 Enjin is a platform focused on gaming in the blockchain. The product ecosystem around Enjin makes game development easier on blockchain platforms. The team uses the slogan “Blockchain:Gamified.”

Enjin’s team has made several tools for game developers to make games on innovative platforms easier. The group introduces itself:

“We’re on a quest to radically transform gaming by bringing real-life economies to virtual worlds.”

The tools from the Enjin team are focused on developing, management, distribution, and integration of blockchain assets, specifically in games.

The team itself represents decentralized nature. The members are from various countries around the world. Enjin started operation in 2009 and has created more than 52M million blockchain assets until now. They collaborate with big names in the gaming industry like Samsung, Unity, Godot, and BGA to develop more tools focused on the gamer community.

The tools required for all steps, from designing and development to fundraising, growing, and monetizing from the game are included in the Enjin platform.

Software developers in the platform can use a new crowdfunding model for their projects. They can create and distribute the digital assets of their games before launch to raise the money needed and then reward them in the released game.

In addition, they have various forms to grow the community and earn money from their games on the Enjin platform. They can charge a transfer fee for trading or selling of their assets on third-party marketplaces. Besides, offering a reward to gamers for social and online engagement.

Software developers and game studios in various sizes and levels can sign-up in the Enjin platform. The pricing starts at $23 a month for indie developers with one project limit. The pro teams with up to three gaming projects have to pay $79 monthly. Bigger studios will have custom pricing based on the number of projects.

Enjin ecosystem consists of a wallet, explorer, coin, standard, and all the games and apps powered by the project.

Many apps and games are now available for users based on the platform and standard. Azure Heroes is one of the most critical projects based on Enjin. This project is a digital badge reward program in the pilot phase owned by Microsoft. The program is a collaboration between the Microsoft Western Europe division and Enjin. The developers in this platform get rewards in blockchain-based digital badges for their community contribution or other achievements. The program mainly focuses on inspiring each software developer to learn and make products on the Azure platform.

Lots of games from famous studios around the world use Enjin as the underlying technology to design, promote, and monetize. Forgotten Artifacts, Age of Rust, Space Misfits, 9Live Arena, Forest Knight, and Binance Collectibles are some of them. Binance Collectibles is a game from the leading global cryptocurrency focused on marketing and brand awareness goals.

Enjin Digital Smart Wallet is the other member of the Enjin ecosystem that provides various services for cryptocurrency storing. The app that is accessible for both Android and iOS platforms makes it possible for the user to create and track an infinite number of blockchain wallets. Swapping cryptocurrency tokens is also available through this wallet. Samsung partnered with the Enjin team to use their wallet in the Galaxy S10 smartphone. One of the essential features of this wallet is the ability to store digital assets from games.

EnjinX blockchain explorer is a complete explorer for all assets and transactions in the blockchain community. The explorer supports Ethereum and ERC-1155 blockchain assets – the multi-token standard for making tokens in smart contracts -, Bitcoin, Litecoin, Binance Coin, Dogecoin, and ERC-721. So the users can track lots of various assets and transactions using EnjinX. EnjinX also provides a marketplace for trading digital assets like collectibles and game assets.

What is Enjin Token (ENJ)?

Each blockchain project uses a token or coin for transactions and similar use-cases inside its platform. Enjin Coin or ENJ is the proprietary cryptocurrency in the Enjin ecosystem. This ERC-20 Ethereum token has multiple use-cases in blockchain-based games. It backs the value for blockchain assets.

The digital assets in Enjin-powered games are backed by ENJ token. So the users trust the asset management of each game and can melt their assets to Enjin Coin at any time. Backing digital assets with this token with real-world value means gamers can monetize their gaming experience, resulting in more engagement.

Besides, ENJ token has a limited circulation and has anti-inflation specifications that make it more reliable as a backing token for digital assets.

Enjin team has developed a robust platform with the gamers and game developers in mind. It has resulted in substantial user-base both in the developer and the gamer community.

Besides, participating with big names like Microsoft, Unity, and Samsung helps the projects to get access to more users. This helps the spread of the word for Enjin, too. After all, is one of the most successful projects among blockchain-based games that has the [otential to grow this community more. More gamers within the blockchain community mean more talking about the technology.

The technology that can revolutionize the whole industry and make it easier for players and developers to make money from their time and attention.