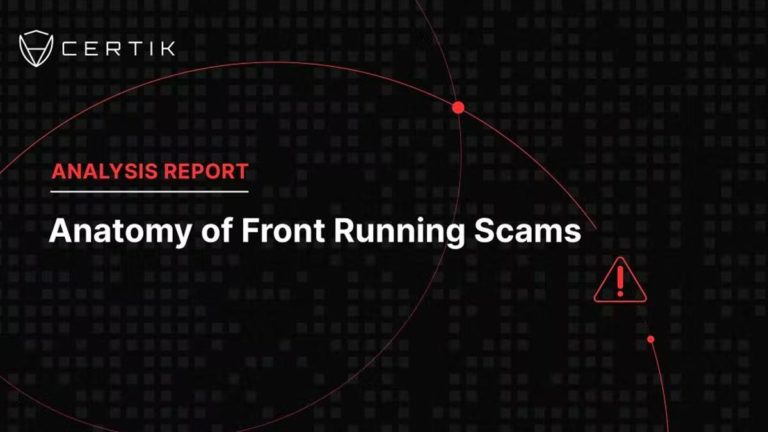 The CertiK team has claimed that video scams about front-running are rampant on YouTube, with a 500% increase seen in 2022. When victims attempt to initiate a transaction, they are lured into downloading fake software that uses artificial intelligence to steal their assets by launching front-running bots.

Those of you who have spent some time on Web3 are probably familiar with advertisements on social media that claim to teach you how to make $1000+ a day using a front-running bot. In these ads, you will see links to YouTube videos that show you how to create and deploy a front-running script that will automatically generate profits as soon as it is deployed.

There are a number of these scam videos on YouTube that claim to be able to teach users how to use a front-running bot in order to earn profits that seem (literally) too good to be true.

As the term implies, front running is the process of exploiting inside knowledge of an unconfirmed trade to conduct trade on the same day as the original trade, essentially getting a jump on it and taking the entire profit on offer as a result.

In a study by CertiK, the company analyzed YouTube videos that mentioned the phrase “front running bot” and found that out of 232 videos that were analyzed, 84% of them were scams. There was a six-fold increase in the number of videos we analyzed in 2022 as compared to 2021.

These videos have a lot in common with each other: they are all about free codes and huge returns. In order to succeed, runners are not going to give away free codes on social media sites. Those who sell it on underground forums will be able to make a substantial profit.

Continuing with the blog post, the author provides a detailed explanation of how scams work and how they work. At the end of the day, the most important thing is to be cautious about something that seems too good for you to make money with crypto and to avoid it at all costs.

CertiK recommends that you should never run any code that you are not fully familiar with or don’t completely trust. A seemingly innocent contract can easily be transformed into a malicious one with only the addition of one line of code.

Scammers rarely fail to follow the golden rule when it comes to scamming: if it seems too good to be true, it probably is. If you are going to invest in any trading strategies or techniques that promise you outsized returns, you should make sure to avoid them, as well as not execute any code until you are absolutely sure you know what you are doing.